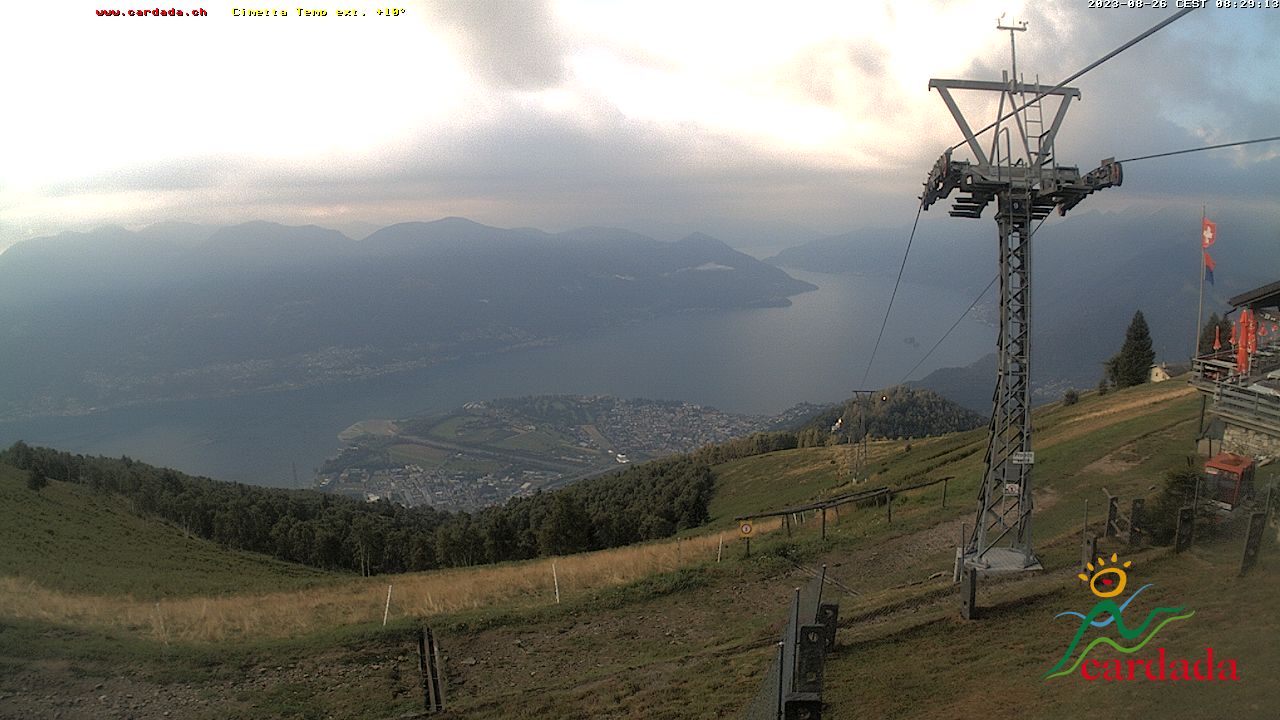 hello and welcome to my sasso residency journal
here i will sometimes write, sometimes draw and maybe it will change tomorrow or next week.
the image in the background is a live webcam (updated every minute).
i am probably somewhere in this picture. can you see me?

When I woke up this morning the sky was cloudy and the very peaks of the mountains were hidden in the clouds. It was somewhat refreshing. I had breakfast outside with Benedikt, Charlotte and Patrick and we talked about how the city of Lucarno looked like a model from our perspective on the otherside of the lake. Yesterday when we went to Lucarno we were in the model and our side of the lake looked like a model.

Today the James Webb telescope's first photograph was released to the public. A photograph of a far away universe that we can hardly relate to.
Somehow I think things are linked. 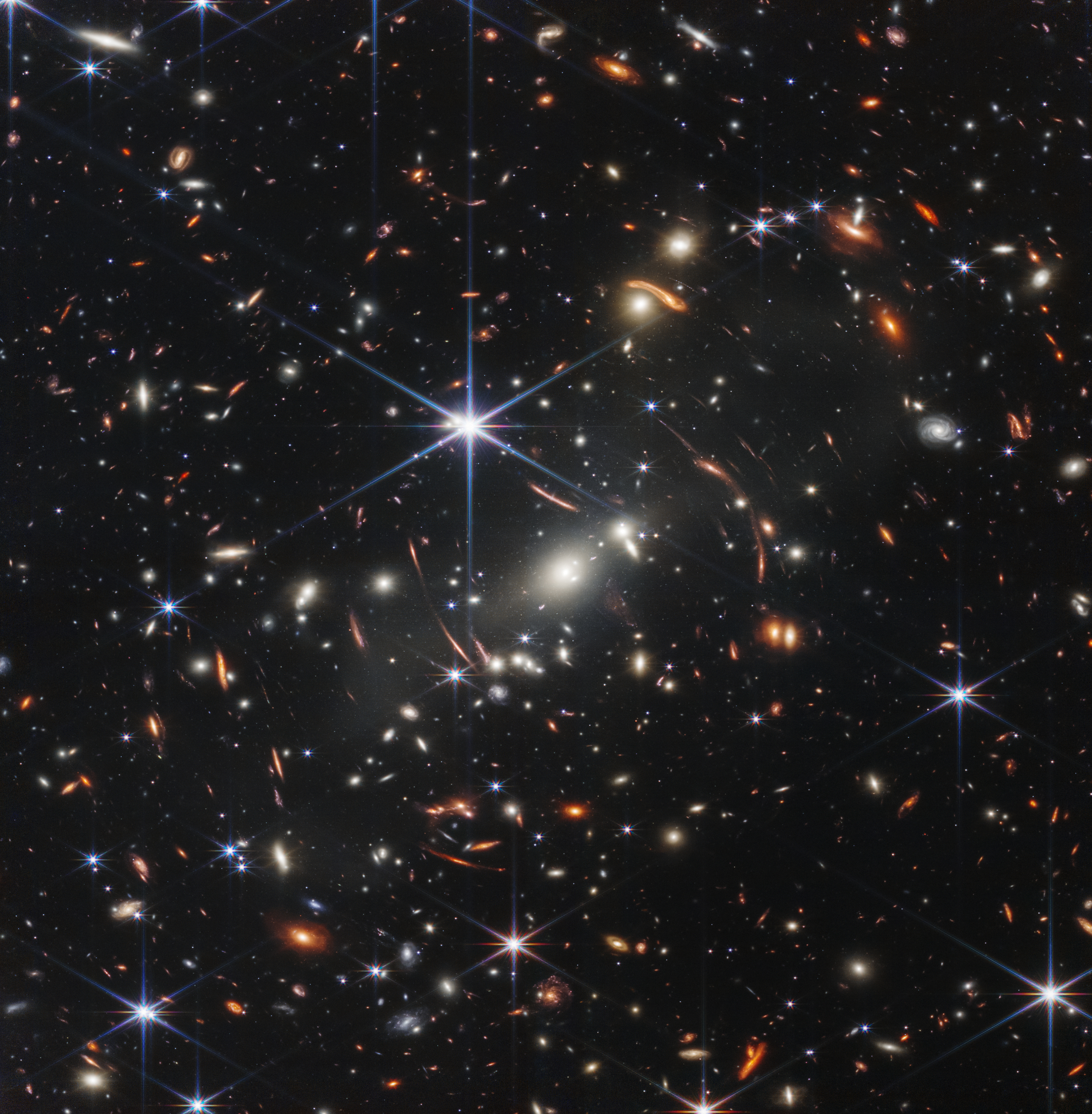 I got back from a short overnight stay in Milano this afternoon. I have been bitten by so many mosquitos. I was listening to an episode of the Good Points podcast on the train between Milano and St Antonini that was actually more about the Venice Biennale and the different ways of presenting work. However, one of the hosts started talking about the difference between group shows and solo shows and it got me thinking about which I might prefer. I always thought I liked the idea of group shows more because it's a physical embodiment of peoples minds coming together. However, I have started to see the value in the solo show. The level of autonomy it gives the artist is something I strive for in other areas of my work, so how can I take the best parts of both a group and a solo show and begin to think through a new format?

Either way, it gave me ideas about how I can treat this residency since this is something I've been thinking about for quite some time now. My current rationalisation of spending time here involves the idea of small, simple experiments that can be performed and then iterated upon.

I'm currently working on a way to tap into radio signals from an NOAA satellite (using a tutorial from Open Weather), I want to see if I can interface directly with this satellite in order to get an semi-regular image of the lake from space. I'm currently wrestling with compatibility issues on my laptop but I'll find a way.

For the last two evenings I've been listening to satellites. It's a more magical experience than I had previously anticipated. It becomes intimate somehow, even though uh its a satellite and its many miles away. The antenna I have is not completely up to the task and there is still a lot of noise that needs to be filtered out but it works. As I sat in the garden looking at the sun setting over the mountains and the lake, the antenna pointed north with each arm extended 53cm at an angle of 120 degrees, I only heard white noise. Then I heard a very faint beep. I took off my headphones to check if it was coming from the neighbours or the house, but there was no noise to be heard around, only the crickets. Then the beep became stronger and stronger. A two tone melody that gentally modulated in frequency. I looked up and saw nothing but sky and stars, but there was a satellite floating above my head.

I sat there with my head titled to the sky for about 12 minutes until the gentle tones began to disappear as the satellite sunk below the mountains around me. It was really quite magical. I did it again the next day in the 'tower' of the house, with less luck because I started to add other variables into the equation like field recordings and broadcasting. Tonight I'll try again with only the satellite, to try and regain that intimate experience.

The next step is to transform the soft tones of the satellite into images. I'm working on that but having a bit of trouble with software still, but progress is being made. Today I will figure it out and I'll remember to make the sourdough today too. 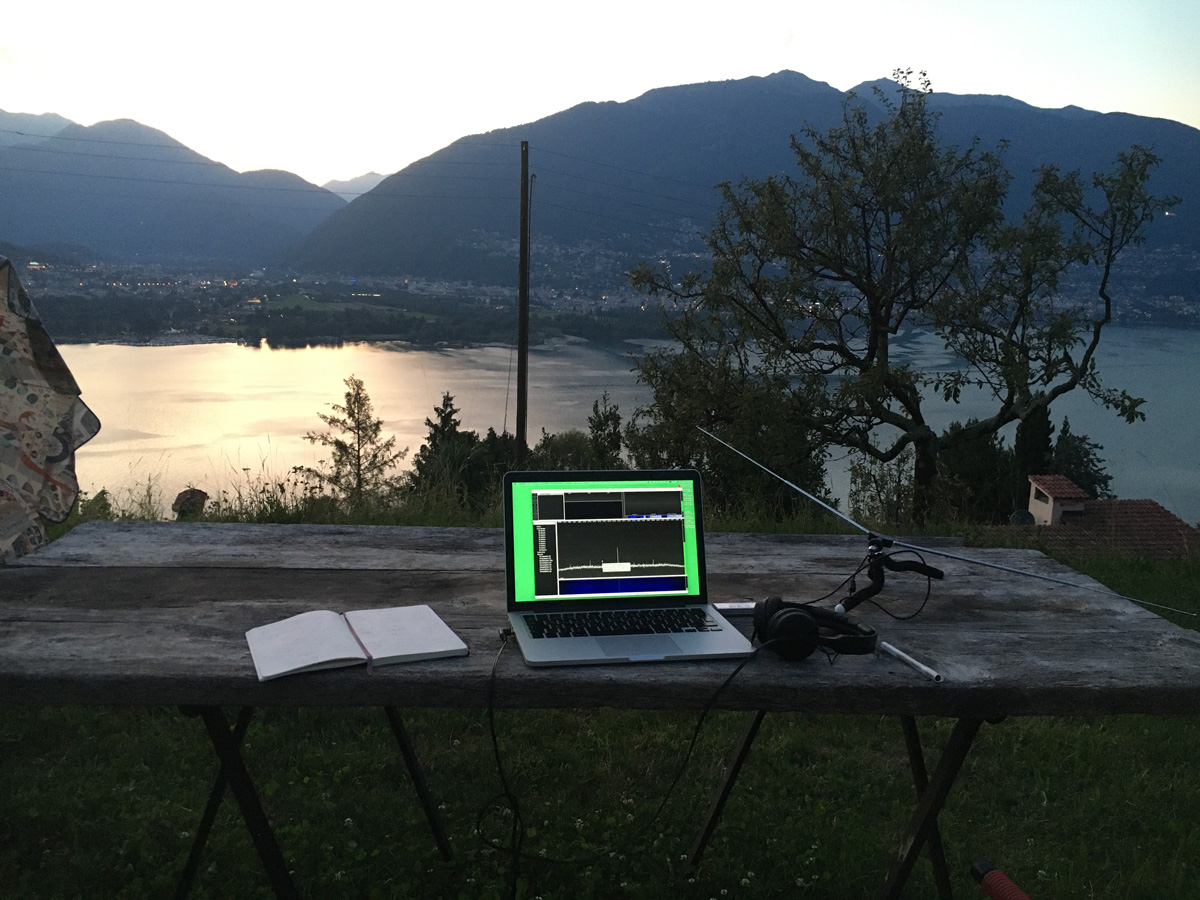 I've spent the last few days working with a bit more of a focus on external projects. I don't really know why I call them external because I am very much a part of them but I suppose it's because they are not necessarily an intended part of the residency. Anyway, my mind has been taken up by other things so today (and most of yesterday was my chance to focus on my satellites again. I've managed to get the sound-to-image software to work and it's producing some lofty results. They images are so far above that they actually mean very little to me, there is no relation to them that I can find. I see clouds and I see shapes in the landscape, but from 531 miles above, it's hard to make out what I'm looking at.

This somewhat brings me to a topic I've been thinking about, relation to something through something else. A lot of my work focuses on how something human-made (often digitally) mediates relationships to a natural or social place, person, object, feeling..etc etc. I've been thinknig about how this real-time, sketchy image of the world from so far above can help me relate to it. With wild fires burning across Europe, the images of massive smoke plumes and burnt landscapes give me a real anxiety for whats to come. Seeing them from above doesn't give me much more than terror and an idea on the extent of the damage done to the surroundings. I don't see living things in these satellite images, maybe because the camera from which the photograph is taken is literally at an extreme distance. Surprisingly, when marking my location on the images I'm recieving from the satellites, I do begin to find relations. I begin to turn an image into a map and I begin to see things around me that I haven't seen before. So then seeing like a satellite doesn't bring me much, however seeing augumented with a satellite does bring me something. Seeing with a satellite. NOAA-19 as a collaborator.

Below is one of the images I've managed to untangle from the noise of the satellite. The image was taken yesterday as the sun was setting over the mountains. 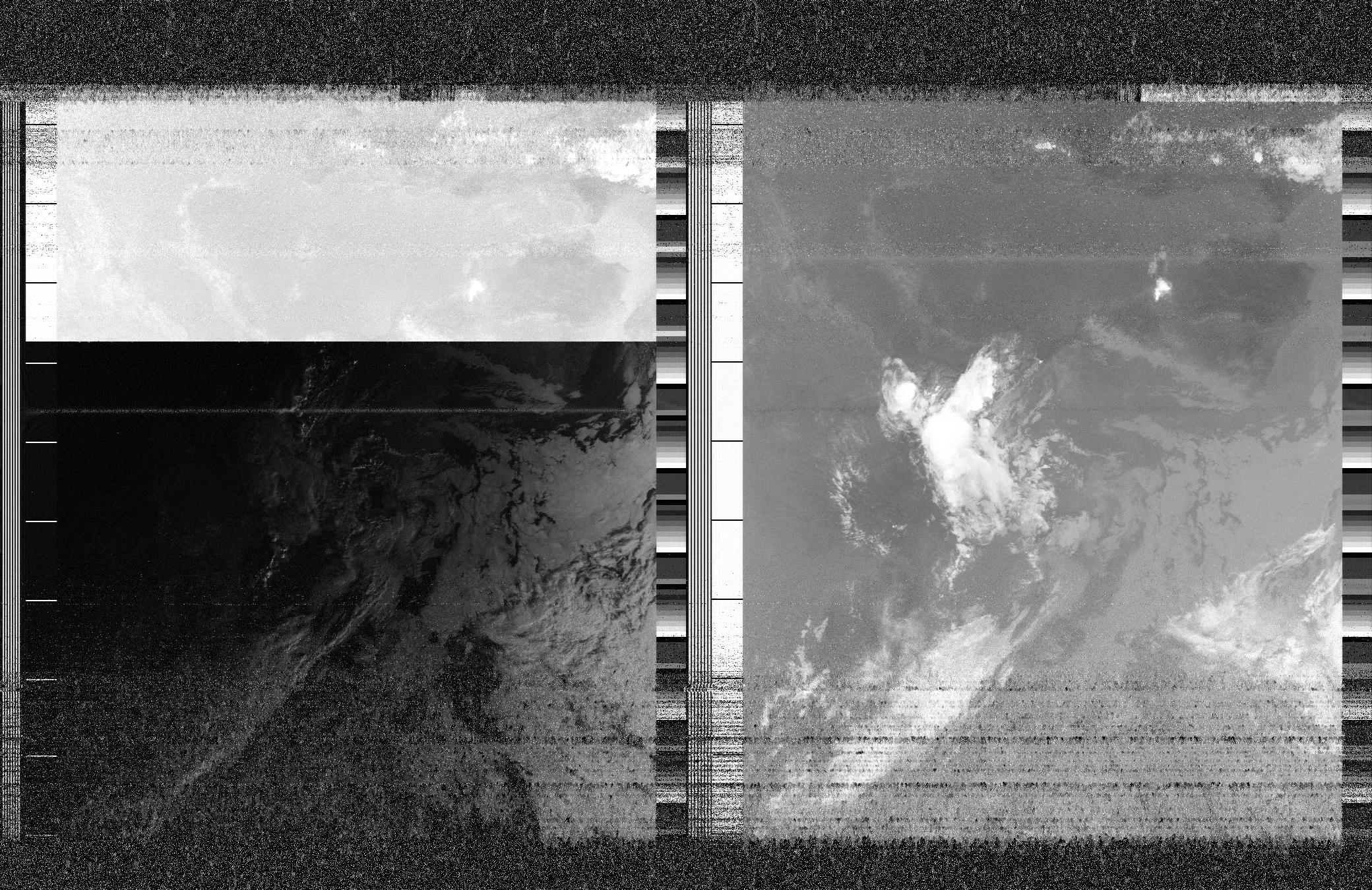 I write these posts directly into Visual Code Studio (my current text code editor). I wander whether that influences what I write as I can see the parts that will make up the website that you might be reading this on. If you're using Firefox and want to see a version of what I see, press command and U. (this also might account for any spelling mistakes you might see :))

The last time I wrote on here was 6 days ago. Since then, quite a lot has happened in both my immediate surroundings but also in my future surroundings. Over the weekend, Benedikt and I went to explore the local botanical gardens. The gardens were started by someone called Otto Eisenhut who was apparently a "patient and talented cultivator of plants and trees". The garden was almost like a jungle with steep banks that ran down to a couple of small rivers in the valley below. The smells were amazing. We wondered around and eventually came across a small waterfall that fed down into the valley of the gardens. It was peaceful and pleasant. A women came to bath her dogs in the cool water, they paddled around in small circles whilst I sat on the rocks and smiled at them. I think they also smiled back.

Yesterday I went on a little solo adventure up the mountain to find a historic chestnut tree grove and another waterfall. After a couple of hours of scrambling up the mountainside, I found the chestnut grove sitting almost 800 metres above the lake below. All the signs were in Italian and I was okay with making my own translations of the signs so didn't get out my phone. I sat on a bench for maybe 45 minutes looking out at the white alpine peaks across the lake and down at the tiny little model boats on the water below. Eventually I left to go to the waterfall which I found easily within 15 minutes. It was a big one, maybe 30 metres tall with a steady stream flowing down across the smooth rocks that made up the cliff. The pool that had formed below was icey cold, so I took a quick dip and then read my book about weather on the rocks around it until the sun moved aross the sky to shine down into the valley. I left when it had gone.

Today I've been watching clouds. Mainly as a potential antidote to the disconnection of the satellite images that I talked about in my last post. I sat in the garden for a couple of hours with a make shift tripod made of a tin can and a roll of masking tape, and took a photo of the clouds every 10 minutes. Inbetween I watched the clouds, chatted with Eric and read more about weather. The book is called Words of Weather: A Glossary. I recommend it to anyone interested in the weather. I printed out the photos and traced them, searching for patterns all the while in the shapes they formed. This way of watching the atmosphere already creates more intimacy than the view from above. The clouds become alive as I notice their slow, meandering behaviour. I begin to make assumptions about wind, heat, geography and the general atmospheric pressures that might shape these clouds into what they are. I think I might try to start making my own personal weather predictions.

I get the feeling that my working method has changed whilst I'm here. I want to be able to bottle it up and take it home with me so that I can continue to work like this with potentially more pressure around me. I feel like I'm going to need to prepare to leave here, it will be more than cleaning and packing. It will be about remembering a way of doing and reminding myself that it can work this way when I sit at my desk in Rotterdam not knowing where to go. Who knows. I need a token of Sasso to take home with me. 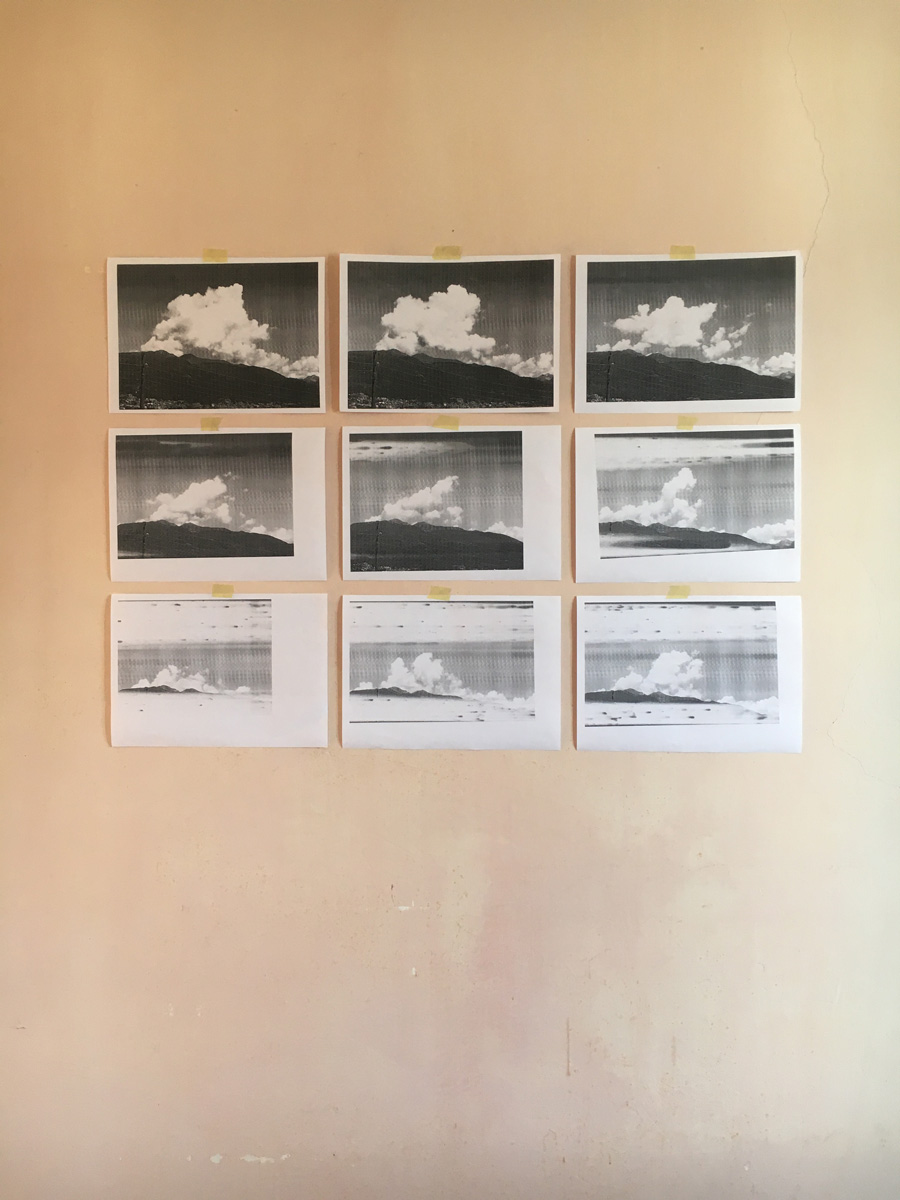